The Community Benefit District in Downtown Glendale supports and promotes business in the area along the Brand Boulevard corridor, South of the 134 and on select areas of Central and Maryland. Our organization is creating a downtown area that is clean, safe and filled with fun. Our goal is to make the downtown district a destination where folks can live, work and play.

Downtown Glendale is far ahead of the curve when it comes to the “New Urbanism” movement that promotes the idea of “live, work and play” in the same area. As a place to live, downtown Glendale is filled with choices from funky to modern. You can walk to work as there are dozens of major companies in our financial center or close to downtown. World-class shopping and unique, small merchants line Brand Boulevard. Some of the best restaurants and bars in LA are on our streets, and more are on the way. The historic Alex Theatre boasts some entertainment gems that appeal to all tastes.

The first thing you’ll notice about the Downtown District is the cleanliness and hospitality.  Our ambassadors keep the streets sparkling as well as welcoming all with a smile, greeting and information.  Our future is bright. The district is always working to freshen and improve our Farmers Market, and to create more opportunities for play after work.

The Business Improvement District is privately funded with property tax money paid by the property owners in the district. We do not use general fund or out of district taxpayer dollars for our projects. 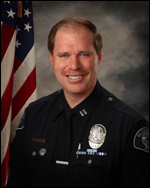 Carl Povilaitis was officially appointed to the position of Deputy Chief on September 5th, 2013. He began his career in law enforcement with the Glendale Police Department in 1991. Born and raised in California’s Central Coast, he moved to Glendale when he became a police officer and has lived in the city since.

Carl obtained an Associate’s Degree in Administration of Justice from Monterey Peninsula College, a Bachelor’s of Science in Criminology with an emphasis in Law Enforcement from Fresno State, and a Master’s Degree in Public Administration from the University of Southern California. He is also a graduate of California Commission on Peace Officer Standards and Training Command College Class 45.

Carl began his career with Glendale in 1991 in the Field Services Division where he worked in Patrol. After three years he transferred to the Investigative Services Division and worked within the Criminal Investigation Bureau in Burglary, Auto Theft, and Arson. He then returned to FSD and worked in the COPPS Unit where he was promoted to Sergeant in 2001. In 2002, he transferred to the Support Services Division where he supervised the Glendale Police Department’s Air Support Unit and was promoted to Lieutenant. In 2005, he returned to the Support Services Division as the Traffic Bureau Commander where he was responsible for traffic enforcement, parking enforcement, and major/special event planning for the City. In 2009, he assumed the duties as the Special Operations Division Commander to begin the process of developing and DNA lab and the Information Lead Enforcement and Accountability Data Project. He was promoted to Captain in 2010. He has since served as the Division Commander of Field Services and most recently Support Services.

Deputy Chief Povilaitis is a member of the Kiwanis club and served as a Commissioner representing the City of Glendale on the Burbank-Glendale-Pasadena Airport Authority from 1999-2009. He has also been an adjunct faculty member at the Glendale Community College and served on non-profit organization boards within the community related to mental health and character and ethics.

Judee Kendall has been the chief paid executive for the Glendale Chamber of Commerce since July 2001.

Before that, she spent twenty-five years in the newspaper business – the last 13 as Publisher of the Glendale News-Press, Burbank Leader and Foothill Leader and Vice President/General Manager of Times Community News, the community news division of the Los Angeles Times.

Her community service work includes service on the Downtown Specific Plan Advisory Group and various other community planning groups and committees, serving on the Advisory Boards of The Salvation Army, the Verdugo Housing Corporation, and The Campbell Center; service on the boards of the Verdugo Workforce Investment Board, A Noise Within, the Character Ethics Project, and as President and board member of the Glendale Chamber of Commerce.  Judee is currently serving on the board of directors of the Glendale Fire Foundation.

Judee is married and has three sons, four grandsons, and a granddaughter. Her favorite pastimes include reading, painting, hiking, and spending time with family and friends.